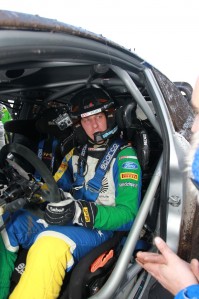 Brendan Reeves at the wheel of the WRC Fiesta

Australia’s Brendan Reeves has taken the wheel of a full works specification Ford Fiesta World Rally Car in the UK.

Reeves joined other leading drivers from the WRC Academy Series who were rewarded with a test drive from M-Sport. The 23-year-old was given instruction by Matthew Wilson, before taking to the wheel of over a two kilometre stage of broken asphalt and loose gravel, the experience served as a taster before Reeves looks to make the next step in his career.

“Today was amazing – a big thanks to M-Sport for letting me drive the car [Ford Fiesta RS WRC] as I’ve always wanted the chance to get behind the wheel of a world car,” said Reeves.

“I went to one of Ken Block’s tests this year and sat in with him, but to actually get behind the wheel, get a feel of the car and understand all the engineering that goes into it was amazing.

“It is such a simple car to drive, but I think to drive on the limit would be another experience. Having the test drive makes me want to compete with one even more. I would be in one now if I could, but I think there’s a lot of work before we can make that a reality just yet.

“We didn’t have the best end to the season, so to turn it around and come here with the chance to drive a car like this was just incredible. I really enjoyed the whole experience.”