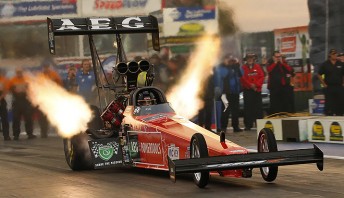 Darren Morgan launches at Willowbank, where a special new format will run during Easter

Willowbank Raceway promises fans of its Good Friday and Easter Saturday ANDRA Drag Racing Series event more action than ever before for the Top Fuel and Top Alcohol classes, where both will run separate events on both days.

Similar to the format the Perth Motorplex has announced for its upcoming Top Fuel event, the Santo’s Cranes Super 3 Extreme Drag Racing event on March 29-30 will see all cars qualify. From there, the two fastest heat winners go into the A-Final, the third and fourth quickest winners go into the B-Final.

A total reset of the field happens prior to qualifying on the Saturday and a winner is crowned on both days of the event.

The driver that scores the most combined points from the two rounds will be awarded a special trophy inaugurated in memory of Louie Rapisarda – The Louie Rapisarda Trophy.

“After more than three years of development by Willowbank Raceway and many months working closely with ANDRA’s new CEO Mal Bulley, I am so excited to be able to say everything is in place for this exciting new concept in Australian drag racing,” said Willowbank Raceway Managing Director, Steve Bettes.

“It really is a radical shift from the tournament-style format the spectators and the racers are used to; providing the chance for all entrants to the appropriate brackets to run at least twice each day, and three times each day for the finalists, rather than first having to qualify one day only to perhaps be eliminated in the first round the next day.

“Answering the calls of the fans for more on-track passes from their favourite professional race categories, and rewarding the competitors for their efforts by giving them more chances to get their prized rides into the finals; I really feel this new format is an exciting experiment for the sport of drag racing, much like the Twenty20 format was for cricket.”

ANDRA CEO, Mal Bulley welcomed the step away from the traditional format:

“In my first year of being CEO of ANDRA I am proud to be strongly behind this new concept event, as we all believe that the sport needs some variety in its promotion and the Santo’s Cranes Super 3 Extreme Drag Race  will certainly achieve that,” said Bulley.

“This is a unique trial event which we hope will be great for the track, racers, spectators, sponsors and the sport as a whole.”
Santo Rapisarda – the major sponsor of the event and father of Louie – will supply two cars to the Top Fuel field and is hopeful the drag racing community will support the return to Easter racing in their droves:

“I sincerely hope we can see a full field of Top Fuel racers from across the country in the race for the Louie Rapisarda Trophy this coming Easter, a field amongst which we hope to enter two dragsters,” said Rapisarda.

“No matter how our race campaign goes during this very special event, I know my family and I look forward to celebrating Louie’s life with our wider drag racing family once again and to presenting the trophy to the deserving winner.”