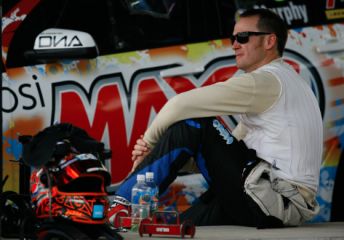 Greg Murphy has labeled his 2012 V8 Supercars Championship as the worst of his career, stating that it is likely to cost him a full-time drive next year.

The four-time Bathurst 1000 winner endured a horror season, which began with a huge qualifying accident at the Clipsal 500 in March that required two operations on his back and saw him sit out five events during the year.

Those absences ensured the New Zealander finished last of the regular drivers in the championship – his worst championship result since joining the series full-time in 1997 – and it has left him extremely venerable in the V8 driver market.

With countryman Scott McLaughlin firming as Michael Caruso’s replacement at Garry Rogers Motorsport, the long-time Holden driver’s only option is to remain with The General are in GRM’s #33 car and Tekno Autosports’ #91 entry.

Speedcafe.com understands that GRM boss Garry Rogers is unlikely to make a decision on whether Alexandre Premat will keep his drive until next year. While the Frenchman showed a promising turn of spend at the season ending Sydney Telstra 500 last weekend, his position is in question, with Nick Percat, Chaz Mostert and Murphy among the names being touted as chances for the drive.

Murphy is also in the frame to drive the #91 Tekno car – a drive that Murphy’s 2012 Kelly Racing team-mate Karl Reindler is too thought to be in the mix for.

Tekno lead driver Jonathon Webb told Speedcafe.com that the team is likely to make a decision on its driver in the coming weeks.

If Murphy does not secure a full-time seat, he will be the most experienced and successful endurance driver on the market. He has already been linked to a drive with the Holden Racing Team.

Murphy says that this year’s championship has been his worst and, without significant backing or sponsorship to his name, he may be out of a drive.

“I’ve had a couple of shocking years, but this one is the worst by far, and it looks bad for me,” Murphy told Speedcafe.com.

“I know I can still drive, but maybe I’ve made too many bad decisions and it has finally caught up.

“My chances of staying in the sport next year are looking slimmer and slimmer by the day, and that’s just the way it is.

“The field is going to look very different next year, and the amount of blokes who are there because what they have achieved in the sport is diminishing. That’s the way of the world at the moment.”

Murphy has spent the past two years driving for Kelly Racing, driving under the Pepsi Max Crew banner.

Murphy says that the workload on the team was a catalyst for its poor results during the season.

“I don’t think anyone in the team could have foresaw how things were going to end up. It was painful – painful for everyone. When I came back in September, I could have never imagined it was going to turn out like it did. Since then, it has been particularly difficult.

“I’m not taking any blame for the performance of the car for the year. There was nothing about them that was up to a standard required to compete at the level we wanted to.

“It was really tough on the guys in the team who was chipping in massive hours to turn up. It was disappointing.

“And the last round in Sydney was ridiculous. To have a component failure on Saturday and then end up in the fence on Sunday … it was fitting in some ways that it all ended like that! It certainly wasn’t a season worth remembering.”