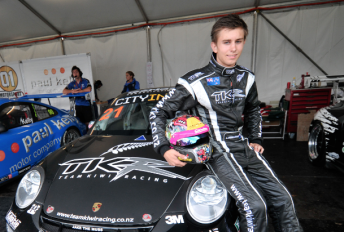 Andre Heimgartner is looking at his options in the Dunlop Series, if he does not secure a ride in the Porsche Supercup in 2013.

The Kiwi youngster recently participated in the Porsche Motorsport International Scholarship shootout at Vallelunga in Italy, where a winner will suit up in the Porsche Supercup, supporting European Formula 1 events.

If he does not win the scholarship, the Dunlop Series is his fallback plan.

“Next year’s a bit up in the air with me potentially doing the Porsche scholarship over in Europe,” Heimgartner told Speedcafe.com.

“If I win it, that would change things, so we really have to wait until that comes out to decide what we want to do, but there have been a few offers in regards to Supercars.

“If I won the Supercup thing, it would be the only thing that I’d be doing, because it would be a great experience to go to all the F1 tracks but next year will be pretty exciting either way.”

The winner of the Porsche Motorsport International Scholarship will be announced in the coming days.

Besides his Porsche racing in Australia, Heimgartner has competed in the New Zealand V8 SuperTourers this year, and also fell one step short of a Bathurst 1000 seat this year having made the three-man final of Shannons Supercar Showdown.