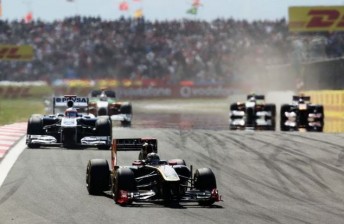 The Turkish Grand Prix may yet return in 2013

The FIA has announced minor changes to the calendar and rules for the 2013 Formula 1 World Championship following its final World Motor Sport Council meeting of the year in Istanbul, Turkey.

The German Grand Prix has been moved forward from July 21 to July 7, with an unspecified ‘European’ race put into its previous slot.

Although not technically a European location, the change could see a return of the Turkish Grand Prix.

Formula 1 commercial boss Bernie Ecclestone has in recent days outlined plans to bring Grand Prix racing back to the Istanbul venue, which missed out on a race this year due to financial problems.

The additional race will bump the 2013 calendar back up to its original total of 20 events, which was subsequently reduced by one with the postponement of the proposed New Jersey Grand Prix until 2014.

The change of date for the German race ensures that the Hockenheim event will now clash with the German MotoGP round at the Sachsenring and the popular Goodwood Festival of Speed in England.

Meanwhile, the FIA has outlined a number of technical and sporting rule changes next year, as outlined in the statement extract below:

Minor changes have been made to the front roll structure design.

Deletion of the ‘force majeure’ allowance when a car stops on the track in qualifying. The FIA will determine how much fuel the car would have used to get back to the pits and add it to the one litre sample minimum.

All chassis will now have higher static loads applied to them (formerly only one chassis was tested to the higher loads with subsequent chassis being tested to 20% lower proof loads).

For safety reasons, use of the DRS during practice will now only be allowed in the place(s) it will be used on the track in the race.

The team personnel curfew will be extended from six to eight hours on Thursday night and only two exceptions will be allowed during a season (formerly four).

A new draft with numerous changes was discussed and agreed by the F1 Technical Working Group and Powertrain Working Group.

The requirement for cars to be driven exclusively under electric power in the pit lane has been postponed until 2017.

A number of changes have been made to the power unit regulations with the aim of limiting technology in some areas in order to reduce development costs.

Changes made to bodywork design, originally aimed at reducing downforce and drag for increased efficiency, have reverted to 2012 specification.

The minimum weight limit has been raised to compensate for additional power unit weight.