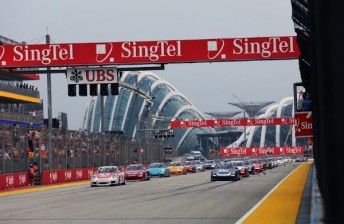 The Carrera Cup Asia field in Singapore this year

Plans are underway for the Australian and Asian Carrera Cup championships to undertake a unique trade deal for next year’s Formula 1 support events in Melbourne and Marina Bay, Singapore.

Negotiations between Porsche, the two championships and logistics partner Gibson Freight are understood to be in an advanced stage.

Porsche Cars Australia’s motorsport manager Jamey Blaikie confirmed plans for the switch prior to flying to Germany, where discussions will continue with the company’s head office.

“My phone has been running hot with guys that want to go and have a run over there.

“It’d be great for the Asian runners to come and challenge themselves here too.

“We had their current champion, Alexandre Imperatori, racing with us at the weekend at Homebush and I’m sure they were all looking pretty closely at how he was going.”

It is expected that the Australian contingent for Singapore will be made up mainly of Elite Class competitors.

While the technical regulations are identical for both series, travelling drivers will have to adjust to the different formats used.

Each Asian championship round allocates 12 tyres to each car for its two-race program, while just eight tyres are used for three races in Australia.

“The regulations won’t change in that respect,” said Blaikie. “Our guys will be loving it but the Asian drivers will have to adapt and learn how to manage their tyres over the three races.”