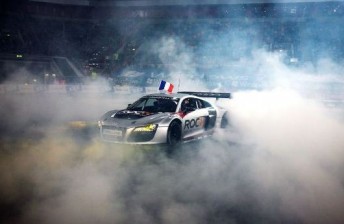 Frenchman Sebastien Ogier will return to the Race of Champions in Bangkok, Thailand, later this month in order to defend his 2011 title.

Ogier, who will lead Volkswagen’s assault on the World Rally Championship next year, tasted success in his first ROC outing last year and says he’s looking forward to having a second shot.

“It’s a real honour to compete in the Race Of Champions,” said Ogier.

“I’ve followed it since it was in Gran Canaria so it was amazing to win at my first attempt last year.

“This year it will be nice to team up with Romain again and we’ll do our best to take Team France all the way this time as well. Overall it’s a good party and a great way to end the year.”

Meanwhile Grosjean, who is expected but not confirmed to return to Formula 1 with Lotus, is hoping to help France to the Nation’s Cup title, held on the Saturday night of the stadium event.

“It’s a great show seeing these guys driving all the cars to the limit and I hope Team France can achieve something too,” said Grosjean.

“Sébastien did a fantastic job to win the individual event last year and it was a pity we were knocked out in the ROC Nations Cup semi-finals (eventually won by German pair Schumacher and Vettel).

“We will aim to go a bit further this time but the main thing is to have fun and to put on a show for the crowds in the stadium.”

This year marks the 25th consecutive running of the Race of Champions, to be held in Bangkok’s Rajamangala Stadium on December 14-16.