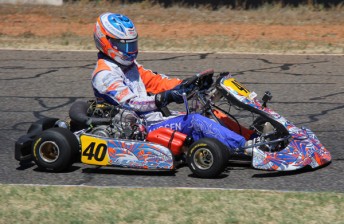 As eluded to on speedcafe.com last month (click here to see original story), 2011 KZ2 World Cup Champion Joey Hanssen has today announced that he be relocating to Australia in 2013 to compete in the Castrol EDGE CIK Stars of Karting Series.

“The best drivers compete in this series (CIK Stars of Karting). My Dad always taught me to race against the best, they will make you a better driver no matter whether you win or lose – you always learn,” said Hanssen.

“I want to thank Brendan Shugg (Lenzo Kart Australia) for giving me the opportunity and my parents for their support all these years and finally have to let me go and also my lovely girlfriend who is so supportive about my passion.”

Hanssen’s only visit to Australia came last month when he competed at the Kalgoorlie Dash for Cash event in Western Australia, where he was victorious. It was at this event where he gained an appreciation for the high level of talent in Australia and believes 2013 will be a big challenge for him – both on and off the track.

Understandably, Lenzo Kart Australia boss Brendan Shugg is excited about having such a well-credentialed driver join his ever-expanding outfit for 2013.

“For Joey to join us at Lenzo Kart Australia its going to take the team to that next level and offer our drivers something no other kart team in Australia can,” said Shugg.

“After seeing how he works and the preparation he does before he gets to a race meeting I can see why he has become so successful. It’s a great opportunity for all Lenzo kart drivers to receive first class advice from a former World Champion.”

The inclusion of Hanssen on the grid as a part of the 2013 Stars of Karting is further proof of the strength of Australian karting ever-growing respect from international teams and competitors for Australia’s elite level of competition.

The 2013 Castrol EDGE Stars of Karting Series kicks off on the final weekend in February at Ipswich in Queensland.