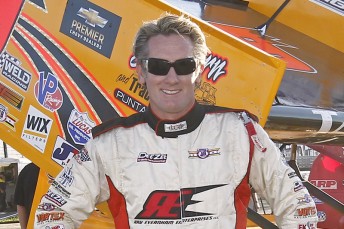 After earlier announcing that he would only be returning to Australia for the Australian Title, Brooke Tatnell will undergo a brief summer campaign with Wollongong-based Steve Caunt Racing team.

His first event will be at Archerfield Speedway’s two night World Series Sprintcars event on January 4-5, which will be a great lead-up to the Australian Championship  across the weekend of January 9-12.

Tatnell has made the huge step to drive for the Caunt team in the Australian Title and not the Krikke Motorsport machine that Australian fans have become accustomed to.

The Minnesota-based father of two will race the World Series Sprintcars event at Sydney Speedway before heading south for the President’s Cup at Avalon and the Grand Annual Sprintcar Classic at Warrnambool.

Tatnell will take to the wheel of Steve Caunt Racing’s former Jason Meyers World of Outlaws equipment during his races for the New South Wales team.

It will be an historical visit for Tatnell who is in his 25th year of Sprintcar racing. In association with the Linigen Family, he will take on the #N25 number to celebrate the occasion.

He is some star power that adds to Tim Kaeding and World Series Sprintcars’ new breed of young guns.