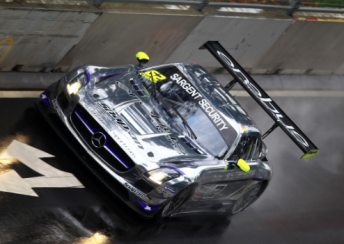 Bernd Schneider at the Sydney Telstra 500

Bernd Schneider is a legend in European circuit racing.

Schneider visited Australia last week to compete with Erebus Motorsport in the final round of the Australian GT Championship at Sydney Olympic Park.

SPEEDCAFE: You have come to Australia to compete in the Australian GT class with Erebus Motorsport. What are you thoughts of the Sydney circuit, our racing scene and the GT class? BERND SCHNEIDER: First of all, I was very impressed about the circuit. I saw the circuit on Tuesday for the first time, did a lap in the rent-a-car as well, and I was really impressed with how they put up the circuit. With the run-off areas it looks really safe for a city race, they did a good job, and I said ‘Oh, this is a circuit I really like.’ I like braking, especially with the SLS, with the ABS braking, it is something that I really enjoy, and I thought that this circuit would suit my driving style quite well.

I met the team on Wednesday for the first time, they showed me the car for first time, and I was really impressed how they prepared the car. Set-up wise, they did a really good job because we didn’t changed anything – the car was just perfectly balanced.

We just made little, little changes on the car and it seems to me that the team have got quite good experience already, also on race tracks like these. I really enjoy every metre out on the circuit, even in the wet it was excellent.

SPEEDCAFE: It’s pretty narrow in some places, though, probably the narrowest street track that we’ve got here in Australia …

SCHNEIDER: Yeah some of it’s a bit tighter. You know, all of the street circuits I’ve run so far, they’ve got places that are a bit tighter, but the main straight is long, wide for overtaking, it’s a possibility, and this is what counts – you have to have the possibility to overtake.

If you go to Macau, there’s only one place to overtake, Monaco as well there’s nearly no way for overtaking, and this is much better for overtaking and for the show.

SPEEDCAFE: Has this whet your appetite to come out and do more? Erebus is likely to compete at Bathurst in the 12 Hour, which is quite a prestigious race for this type of cars.

SCHNEIDER: Bathurst is one of the most challenging circuits, and I would really love to do it once. If there is a possibility, of course I will.

If a team from Mercedes do the race next year, I would really appreciate joining them, because it is one of the best races. It’s a good challenge. In the last few years Audi has spent a lot of time and money to win this race, and I would like to give it a really good challenge.

SPEEDCAFE: You’ve actually already been to Bathurst as part of a Mercedes drive day …

SCHNEIDER: Yeah, I was there in 2008 in road cars only, and I really love it. It gives me memories of the Nordschleife and the Nurburgring, and it can compare. It’s a bit shorter, but the same challenge.

SPEEDCAFE: You’ve had a look through the V8 Supercars paddock at Sydney, which is our number one category here in Australia. What do you think of those cars, the category, and how does it sits compared to other comparable championships around the world?

SCHNEIDER: First of all, I think it’s really similar to DTM. If you see the times, very close, very tight, a lot of drivers within one second and you really have to get the best out of your team, your mechanics, your engineers, and yourself to be competitive.

The cars are a bit different to DTM cars, for example, much higher and heavier, a little bit different to drive, you’ve got also no ABS, no traction control. On the other hand, they’re close to DTM but no it’s really good, really interesting, good racing, that’s the main thing.

It’s a really good show for the crowd, and I enjoy every race I see every time I try to find a channel in Germany to find them and I watch them, because it’s really good motorsport.

SPEEDCAFE: Mercedes is coming in next year with the AMG and Erebus entering the series. How do you think they’ll go given they’ve got some challenges and a tight timeframe to try and turn it around?

SCHNEIDER: I know that this is not an easy step. With all the experience we have, it’s not easy coming here and building a car and winning or dominating the first season.

It will be a hard season for the team, but as I said, Erebus team is a very, very professional team, and the guys they have with them have been so successful in the last few years. They know what to do and they have good drivers as well, and I’m 100 percent sure Mercedes will push as much as they can to support the team as well as they can so that they are successful because if Mercedes or AMG take part in a championship, they are not there to be last or 15th, they try to win. Even if they know it’s very difficult, they push hard and they never give up.

SPEEDCAFE: I know that you’re in semi-retirement at the moment, but the Bathurst 1000 is the pinnacle of our sport. Could someone entice you to come and do it?

SCHNEIDER: No, not yet. [Laughs]

SPEEDCAFE: So no chance of considering it?

SCHNEIDER: No, I don’t think so. I have been in a number of ventures and I have several shops to look after. I did all the development of the SLS GT3 car, and I am involved in road cars as well, I did the SLS and did the Black Series Coupe, and some other cars at the moment that I am working on.

I’m an instructor for a team, and we have many, many events in Europe we are involved with, I am involved in the DTM broadcaster in some races.

It keeps me very busy, and I don’t think there is more room to do more races than I did this year, and this year I did already many. I did the 24 hour Dubai, Nurburgring, Spa, I did a couple of long-distance races at the Nordschleife, I’ve been in Macau, and now I am here, I’m still involved in racing, but that doesn’t mean I’m planning a comeback in any categories – I’m 48.

SPEEDCAFE: So do you enjoy not being a part of a full-time championship and racing in one-off type things, like the Sydney event?

I never was thinking of coming back and doing any more races for money, because it’s just not what I do at the moment. But you never know what’s going to happen, even from AMP side, because if they have any ambitions, then we have to talk about that but there’s definitely no plan at the moment to do something more.