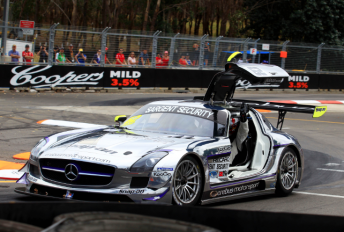 German racing legend Bernd Schneider says that he is hopeful of  competing in the Bathurst 12 Hour next year.

After competing in the final round of the Australian GT Championship with Erebus Motorsport in a Mercedes Benz SLS GT3s at Sydney Olympic Park last weekend, Schneider has expressed his desire to return to Australia next February and race in the 12 Hour event at Mount Panorama.

Erebus Motorsport is close to confirming its entry in the Bathurst 12 Hour, competing with its silver SLS GT3.

Schneider dominated both races in Sydney, and says that if Erebus offer him the Bathurst opportunity, he will take it.

“Bathurst is one of the most challenging circuits, and I would really love to do it once. If there is a possibility, of course I will,” Scheinder told Speedcafe.com.

“If a team from Mercedes do the race next year, I would really appreciate joining them, because it is one of the best races. It’s a good challenge.

“In the last few years Audi has spent a lot of time and money to win this race, and I would like to give it a really good challenge.”

Erebus CEO Ryan Maddison says that once his team locks away its Australian GT plans for 2013 and beyond, he will look at ways of securing Scheinder for the 12 Hour.

“We think having Bernd come down for the 12 Hour would be a fantastic drawcard for the event,” said Maddison.

“There are a few things that would have to take place before that could happen. Obviously, he’s made his intention clear, so it’s in the hands of other people.

“We are in the process of putting our GT program and strategy together for 2013.”

CLICK HERE for more with Bernd Schneider in this week edition of Cafe Chat.