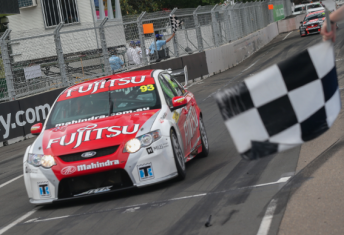 Scott McLaughlin crosses the line to secure the 2012 Dunlop Series

Scott McLaughlin is riding a wave of success at the moment.

The Fujitsu-backed driver won the New Zealand V8 SuperTourers Series last weekend at Ruapuna, following it up with victory in the 2012 Dunlop Series at Sydney Olympic Park yesterday.

Add to that a sixth place in the Bathurst 1000, and a last-minute entry into the final V8 Supercars race of the year and you’ve got yourself a fantastically frantic end to 2012.

Now, McLaughlin is a prime candidate to make the step up to the V8 Supercars Championship, however, he is yet to secure a deal. 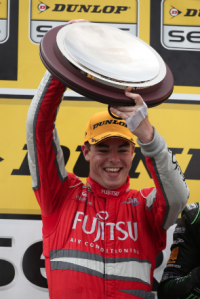 Speedcafe.com’s Grant Rowley spoke with McLaughlin after his busy Sydney weekend to reflect on a triumphant season.

SPEEDCAFE: What a year … or what a few weeks! You wrapped up the New Zealand V8 SuperTourers title, and you’ve won the Dunlop Series and you made your ‘solo’ Main Series debut. A huge couple of weeks …

Winning the SuperTourers Championship, we wanted to do that, and the Dunlop Series has been our season-long goal. To get both of them in the one year is special.

And then to get the opportunity with Garry was a special – a nice reward for being involved in the Fujitsu program.

SPEEDCAFE: When did you find out you were going to drive in Alexandre Premat’s #33 GRM car in the last race?

McLAUGHLIN: I didn’t even know until I got our of the car after the last race and after the podium. I went down there, had a seat fit and I was on my way.

It all happened all of a sudden. We had a Safety Car period and I thought to myself “Jesus, I just won the Dunlop Series, and now I’m in the Main Series!”

SPEEDCAFE: Was it hard to get your head around all that and stay composed?

McLAUGHLIN: It was but once I was in the car and I had my helmet on, I’m sweet. Today, I think it got the better of me, particularly in the Main Series race. It was overwhelming.

I feel like I’ve taken the day for granted. Everything was out of the blue and a dream come true. It was the biggest day of my life and the best day of my life. I can’t thank everyone enough.

SPEEDCAFE: You’ve tested with GRM before, but the first time you drove the car this weekend was on the out-lap before gridding up. Can you explain some of the differences between the SBR Falcon and the GRM Commodore?

McLAUGHLIN: All the cars are quite similar, but they all have their own characteristics. The biggest thing was that I had to carry the brake a little longer into the turns with the GRM car just to get a little more turn out of it. They are different – the noise, the way the gearbox selection is, the buttons on the steering wheel.

I’ve already tested their cars, so I had a small idea what it was going to be like. After the first stint, I got my head around it and it was all good.

SPEEDCAFE: Looking back at the season, can you pick out a highlight?

SPEEDCAFE: And a lowlight?

McLAUGHLIN: The first race at Bathurst was a massive disappointment. I didn’t think my chances were gone, but I knew then that it wasn’t going to help. It was pretty bad, but great to come back from that.

SPEEDCAFE: You made a special mention to Ross and Jimmy Stone. They gave you your first chance, and I’m sure you’d agree that they have been pretty instrumental in your career.

McLAUGHLIN: They have. If it wasn’t for them, I wouldn’t be at this point. I thank them a whole lot. No matter where I go, I’ll never forget that they gave me my first opportunity.

And to all my boys – the same crew who have been with me for the past four years, and to Fujitsu. I’m absolutely stoked.

SPEEDCAFE: So, what happens from here? What are you chances of securing a drive in the ‘Main Series’?

McLAUGHLIN: I think our chances are very good. Nothing is done at the moment. I’m trying to get it done, but I can’t do any better than win the Dunlop Series.

I got a drive-through in my Main Series race (spinning tyres during a pit stop), but we’re working on it, and hopefully come the start of next year, we’re on the starting line.

SPEEDCAFE: Do you have any preference on which team you’d like to drive for? Or is the preference just to be in the game?

McLAUGHLIN: My preference is to be anywhere, but all depends when the deals come on the table and what will happen. We’ll decide then, but I think it’s looking good at the moment.

SPEEDCAFE: Will you continue to compete in V8 SuperTourers next year, regardless if you’re driving the V8 Supercars Championship?

McLAUGHLIN: Yeah, that’s the plan, and I’m 95 percent sure we’ll be doing that.

I want to run with the number one on my door over there. That would be pretty cool. Obviously, if I do get a Main Series drive, it will be my first full drive and a lot of rounds to bolt on another second tier series. That will be tough, but I’m looking forward to it. It will be a good challenge.