Will Davison wins 2012 finale in Sydney

Will Davison wins 2012 finale in Sydney Will Davison and Ford Performance Racing have farewelled the current generation of V8 Supercars with victory in the 2012 season finale at Sydney Olympic Park.

Starting second on the grid, Davison squeezed past pole-sitter Garth Tander on the fifth lap of the race and was only headed during the pitstop cycles thereafter.

Craig Lowndes finished second having jumped eventual third place finisher James Courtney in the second and final round of pitstops. 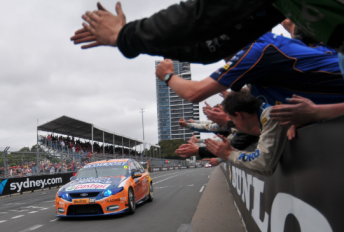 Lowndes kept Davison honest in the closing stages, with the final margin between the pair just 2.6s.

The win is the 14th of Davison’s career and FPR’s 11th of the season, ensuring only the factory Ford team and TeamVodafone won races in 2012.

Winterbottom had earlier dropped to the back of the field after being pushed into the tyre barrier at the opening corner thanks to a bump from James Moffat.

Tander was also hit by a puncture, taking the flag in 16th having run second during the first stint and a half.

The race was run in dry conditions as threatening rain never materialised.

Two Safety Cars punctured the early stages, with the first called on the opening lap thanks to a clutch problem stranding Shane van Gisbergen on the back straight.

Greg Murphy was spun into the Turn 10 exit wall by Michael Patrizi shortly after the restart, causing the yellow flags to fly once more.

Also on the retirements list was David Wall, who suffered damage when spun by Russell Ingall and subsequently collected by James Moffat at Turn 9. Ingall later retired with a broken rear axle.

Tony D’Alberto’s last race in a Falcon ended with gearbox problems, while Michael Caruso retired at the start of the penultimate lap with brake problems having run ninth a short time earlier.

Fabian Coulthard was also a hard luck story – dropping from seventh to 15th over the final three laps as his car ran low on fuel.

Caruso’s team-mate Scott McLaughlin meanwhile put in a solid drive to finish 17th having been called up to replace Alex Premat just an hour before race start.

Championship standings after Race 30 of 30