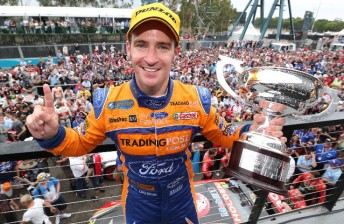 Will Davison with the Race 30 trophy

It was a relieved Will Davison that took out the 30th and final race of the V8 Supercars season at Sydney Olympic Park, breaking a run of near-misses for the Tradingpost FPR Falcon driver at the Homebush venue.

Davison greeted the chequered flag just 2.5s ahead of TeamVodafone’s Craig Lowndes after 64 consecutive laps of green flag racing to the finish.

The 30-year-old was warned by his crew several times during the race to be wary of damaging his Ford’s steering on the circuit’s unforgiving kerbs.

Steering failures saw Davison drop out of the lead on Saturday – a repeat of a failure that had robbed him of a Homebush victory 12 months earlier.

“It might have looked easy but it never is around here with these cars, particularly the steering arms,” said Davison afterward.

“Last year they put me in the wall leading, yesterday it put me out leading and today we finally got it to the line.

“I’m just pumped to end the year like this. We’ve had a good year and finally got a win at Homebush. I love the circuit it just hasn’t been kind to me.

“The race was relatively straight forward for once. After the early Safety Cars it was a bit of a fuel race trying to make the final stop as quick as possible.

“It’s very hot around here and very easy to make a mistake, but I enjoyed every single lap.”

Davison led the points standings for much of the early part of the season, but tough runs at Sandown and Bathurst soon put him out of the reckoning.

“It’s frustrating (not to be further up in the standings), but the level out there is really impressive,” he said.

“We just weren’t quite good enough in a couple of areas in race trim, certainly not in one lap pace.

“We are working hard and but there’s nothing we need to do different (next year), we’ll just keep doing what we’re doing.

“It’s been a real step up from FPR this year and we’ve just got to keep the continuity and hard work going with the Car of the Future and see where we end up next year.

“When you look at it as a whole it’s been a very impressive season.”

Davison’s victory in the final hit-out of the year ensured that TeamVodafone and FPR shared every one of the season’s 30 race wins.