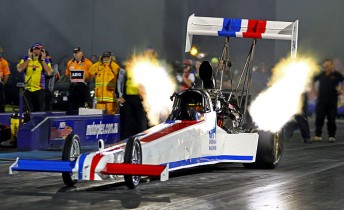 Local Perth racer, Mark Sheehan has taken his second ANDRA Top Fuel event win at the Perth Motorplex, defeating Phil Lamattina in the third round of the Australian Championship.

It was a giant killing performance from Sheehan who ended the hot streak of Darren Morgan. Morgan, who won the opening two rounds of the Championship watched on as Sheehan ousted him from proceedings.

Coming up against Lamattina – who made his third consecutive final – Sheehan would have to press hard to beat the Mildura carrot farmer.

In a pedal-fest final, he was able to cross the line first to defeat Lamattina and take the win.

“A win’s a win and I’m proud for all the guys on my team but I felt genuinely bad about beating Darren,” he said, admitting guilt for ending Morgan’s run. “However all these guys are serious competitors so it is good to be able to have a win against them.

“We’re still waiting to take that ‘solid’ win where we can come out and run some regular 4.60s and really earn it.”

By finishing second, Lamattina has moved to within nine points of Morgan.