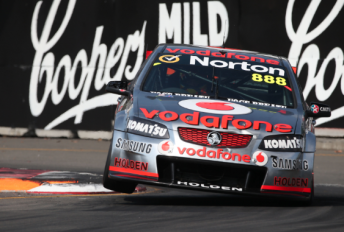 Race 29 winner Craig Lowndes is 25 points worse off after the stewards found him guilty of contact with Garth Tander yesterday.

The TeamVodafone driver collected the rear of Tander’s Holden Racing Team Commodore on the opening lap of yesterday’s race, spinning the three-time Bathurst winner at Turns 2/3.

The penalty sees Lowndes drop back to third place in the championship standings, 22 points behind Ford Performance Racing’s Mark Winterbottom.

With Lowndes’ team-mate Jamie Whincup already assured of the 2012 V8 title, the fight for second is the major championship position focus ahead of today’s final race of the year.

Winterbottom and Lowndes will start the 250km race alongside each other on the third row of the grid in fifth and sixth respectively.