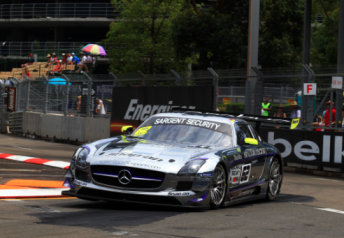 Schneider continued his dominance on the Sydney streets

Klark Quinn has taken out the 2012 Australian GT Championship after a final race of the season that was again dominated by German Bernd Schneider.

Quinn started the 30 minute finale knowing that third would be enough to secure the title regardless of any other permutations, and a podium hardly looked in doubt as the race unfolded.

The Porsche GT3-R driver attempted to take Schneider on the outside at the first corner, before slotting back into a lonely run to second for all but the standard pit stops shuffle.

Schneider repeated Saturday’s masterclass with another comprehensive victory. Consecutive lap records on Laps 2 and 3 were the highlight in a race which the Erebus Motorsport stand-in won by 22.5 seconds over a 17 lap Race 2 which was shortened by 3 minutes.

Peter Hackett had yet another forgettable day. The championship chance had climbed to third on Lap 2 after starting from the back as a result of yesterday’s DNF, but wilted under pressure from John Bowe late in the piece, outbraking himself and running down the Turn 1 escape road on what would be the final lap.

Nick McBride failed to finish after crunching the concrete, while Rod Salmon did not start.