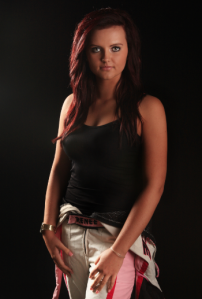 Renee Gracie will compete in Carrera Cup next year

Touted as Australia’s version of IndyCar and NASCAR femme racer Danica Patrick, Gracie will step up from karting to contest her first national circuit racing championship, becoming the first female driver to compete in Carrera Cup.

Gracie will compete with experienced team Andy McElrea Racing, which has fielded Porsches for Alex Davison and Tony Bates this year.

With Davison set to move back into the V8 Supercars Championship next year with Ford Performance Racing’s new fourth car, a place for Gracie has emerged at the team.

Gracie, 18, is a leading Rotax Pro and CIK sprint kart driver and has been an integral part of the Fujitsu ‘Cool’ Driver Program.

The deal for Gracie to drive in the all-Porsche category, and the complete sponsorship and marketing program behind it, is set to be announced at Sydney Olympic Park this morning.