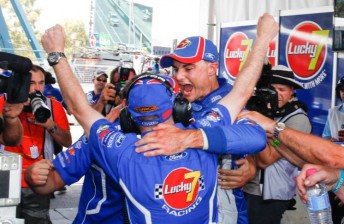 Lucky 7 Racing’s Tim Slade has scored the first pole position of his career ahead of the penultimate V8 Supercars Championship race of the season at the Sydney Telstra 500.

Slade was the seventh car out in the Top 10 Shootout, with his 1:29.55s time proving enough to withstand an attack from qualifying fast man Will Davison.

Davison had been 0.4s quicker to the end of the second sector before a mistake at Turn 10 dropped the Tradingpost Ford 0.08s behind.

Davison been attempting to to lock-away the $20,000 prize for scoring the most poles of the season.

“I’m yet to have a pole or a race win in this category so to tick one of those off is very special,” said Slade afterward.

“We’ve ticked a lot of other boxes this year and it’s obviously a good starting spot for this afternoon’s race.”

“It was a pretty ordinary job by me,” added Davison of his effort.

“I had quite a few moments during the whole lap but then had quite a big one at Turn 10 and nearly went straight in the fence.

Rick Kelly will start 10th after pulling off on his out-lap with no fuel pressure in his Jack Daniel’s Racing Holden. The #15 entry will now undergo an engine change prior to the 250km Race 29.

The session was held in dry and sunny conditions following rain earlier this morning.