Reid moves to second in battle for Carrera Cup

Reid moves to second in battle for Carrera Cup 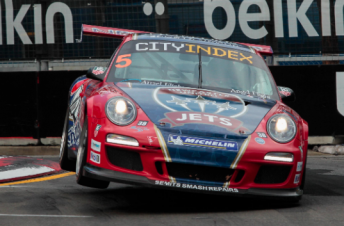 Jonny Reid has moved to second in the City Index Carrera Cup after winning the opening race of the season finale at Sydney Olympic Park earlier today.

Reid beat home his countrymen Craig Baird and Steven Richards to claim the 200th race in the Australian series’ history.

Reid and Baird made an even start from the front row of the grid, but it was the Hunter Sports Group driver who prevailed at the first corner, courtesy of the inside starting berth he earned after snaring pole in the morning’s qualifying session.

The men who have alternated round wins since Round 2 did make side-to-side contact while braking, but no harm was done.

While the rest of the race was somewhat more procedural up front, the battle for the lead was an absorbing one, given the closeness of the battle for the lead. Reid looked like getting away at the halfway mark before Baird clawed back the margin, but two committed final laps from the 2012 champion were not enough to unsettle Reid.

Richards had a watching brief in third for most of the race, having claimed the place from Daniel Gaunt on the run to the Turn 2/3 chicane on Lap 2. The twice Bathurst 1000 winner immediately set about going after Baird, but couldn’t sustain the challenge.

Alex Davison, meanwhile, waged an early battle with Swiss guest Alexandre Imperatori for sixth after struggling in a wet qualifying session. He was the fastest man on the track once he extricated himself from the duel, but had already lost too much track position to catch those in front by race’s end.

Max Twigg’s 11th place was good enough to wrap up the Elite class with two races to spare.

Race 2 gets underway after the V8 Supercars today at 1715.