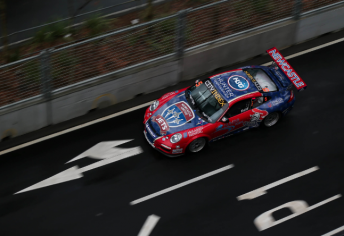 Jonny Reid has continued his impressive run at Sydney Olympic Park, taking out Race 2 of the City Index Carrera Cup late this afternoon.

Reid headed up another all-Kiwi podium, with he and Craig Baird joined by Daniel Gaunt in the top three.

The Hunter Sports Group driver lead for all but a few seconds of the 12 lap affair, getting the jump from the line and criss-crossing Baird when the 2012 champion braked late in an attempt to seize top spot at the first corner.

Baird saw out an early challenge from Gaunt, before setting off in pursuit of the lead when Gaunt made a mistake and fell back. The Jet Travel Insurance-backed driver pegged a margin which had exceeded a second back to less than 0.4s with two laps remaining, but Reid appeared to be able to respond to car #1’s advances when necessary.

Gaunt let Baird off the hook when he made a poor exit from the turn 6/7 chicane on Lap 4, and had to defend his position from Richards with some questionable weaving on the run to the train station section of the circuit, just as he did on the opening lap.

Richards would in turn afford breathing space to Gaunt when he had a big moment skating on the rears into the turn 2/3 chicane on Lap 7, baulking Nick Foster. Richards managed to right the path of car #12, but Alex Davison pounced to take fifth position.

That was how they would stay, with Alexandre Imperatori, James Koundouris, Tony Bates, and Max Twigg rounding out the top 10.

Andre Heimgartner failed to complete a lap due to mechanical problems.

Reid leads Davison in the race for series runner-up honours by 45 points ahead of tomorrow’s year-ending race at 1040.