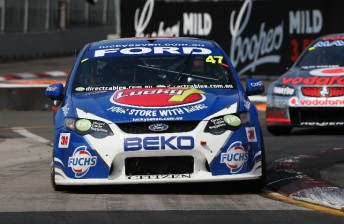 Tim Slade was left with mixed emotions after a long day at the Sydney Telstra 500 that saw the Lucky 7 Ford driver score a maiden career pole before narrowly missing his first V8 Supercars race win.

The 27-year-old led 32 of the race’s 74 laps before falling behind Craig Lowndes and James Courtney by sliding wide at Turn 9 with just 14 remaining.

Although managing to retake the Holden Racing Team Commodore soon after, Slade greeted the chequered flag 1.1s behind the winning TeamVodafone entry in second.

The fight for the win had been a fuel economy battle for much of the closing stint, while Slade had also been struggling with a lack of water in the scorching heat.

“I’m pretty happy with the day but in the same sentence I’m peeved off that I made the mistake,” said Slade afterward.

“It seemed like Craig and I were fairly similar on fuel but it’s always hard to say (what would have happened if I didn’t make the mistake).

“The car was good but in the last two stints it was pretty hard being the leader saving fuel when you don’t have other cars to guide yourself off.

“I ran out of water with about 20 laps to go and was cooking inside which probably forced the mistake.

“After that we saved enough fuel to have a go in the last few laps. James was struggling with fuel and we tried to close the gap to Craig but even if we’d caught him it would have been another thing to get passed.”

Slade had earlier lost the lead to fellow front-row starter Will Davison at the opening corner, with the Tradingpost Falcon hanging on around the outside of the Stone Brothers Racing prepared entry.

“I had the skirt on going into the first corner, I was probably too cautious on the brakes, but in saying that it’s pretty dirty offline and I didn’t want to make a mistake,” he said.

Lowndes’ victory over Slade ensured that the TeamVodafone/Ford Performance Racing domination of the V8 Supercars Championship stretched to a 34th consecutive race victory for the two teams.

Second place for Slade, combined with a failure to finish for team-mate Shane van Gisbergen, ensures that Slade moves to fifth in the championship standings – 116 points ahead of the Kiwi.

Tomorrow’s final race of the 2012 season will mark the end of an era for both V8 Supercars and SBR, with the team set to switch to Mercedes-Benz AMG equipment next season under the category’s new Car of the Future regulations.