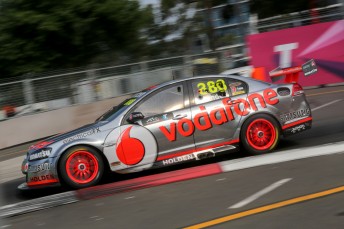 Craig Lowndes at the Sydney Telstra 500

Craig Lowndes has moved to within one victory of Mark Skaife’s all-time win record by taking the penultimate race of the season at Sydney Olympic Park.

Lowndes led home pole-sitter Tim Slade by 1.1s after a fuel economy battle over the final stint to chalk up his 89th win.

Slade had led Lowndes at the start of the final stint but fell to third with a small mistake just 14 laps from home.

Lowndes had earlier been forced to fight back from an opening lap collision with Garth Tander that saw the TeamVodafone Holden drop to 23rd.

The win moves Lowndes to second in the championship standings ahead of the final race, just three points clear of Mark Winterbottom.

James Courtney and Jonathon Webb crawled home third and fourth respectively as they ran out of fuel in the final laps.

Jamie Whincup, who had dropped from second to 11th when pulling over to ensure team-mate Lowndes did not have to queue behind him in the final stops,  fought back through to take fifth.

Winterbottom had been one of several drivers to make a third stop during the final stint knowing he could not make it to the end on fuel.

Sweltering conditions added to the difficulty for the drivers. Frenchman Alexandre Premat fared worst – eventually forced to pit and be helped from his car due to the extreme heat.

The race started in bizarre circumstances with the Safety Car called on the opening lap after a clash between Tony D’Alberto and Shane van Gisbergen that damaged the steering on the SP Ford, which subsequently ran into the medical car.

The full course yellows appeared three times over the opening 20 laps with a mechanical failure for Steven Johnson and a clash between David Wall and D’Alberto prompting the Safety Car’s second and third appearances respectively.

The latter incident saw the entire field bar Winterbottom head to pitlane – the Orrcon Falcon running another 10 laps before taking fuel and tyres.

The tight finish was ensured when the fourth and final Safety Car, this time for Jason Bright’s stranded Team BOC Holden, was called with 29 laps remaining, seeing all except Michael Caruso head to pitlane.

Fuel strategy was the least of the troubles for several, including early leader Will Davison, who damaged his steering against the circuit’s unforgiving concrete walls early in the second stint.

Garth Tander spent the day in and out of pitlane as alternator problems required multiple changes of battery. The issues ensured Tander spent much of the race without a working cool suit as a result of his troubles.

Those failing to finish included Fabian Coulthard (broken throttle spring) and Greg Murphy (damaged steering), while Lee Holdsworth did not take the start after a driveline failure at the start of the warm-up lap.

The second 250km leg of the Sydney Telstra 500 will bring the 2012 V8 Supercars Championship to a close tomorrow.

Championship standings: Top 28 after Race 29 of 30