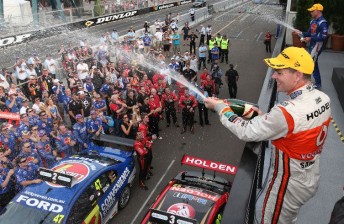 TeamVodafone is on track to secure a one-two in the V8 Supercars points standings for a second consecutive year after Jamie Whincup sacrificed his Race 29 chances in favour of team-mate Craig Lowndes.

Whincup, who is already guaranteed to win the championship for a fourth time, pulled into a vacant pit bay at the final round of stops in order to let his team-mate by – ensuring Lowndes would not have to queue behind the #1 Holden in order to take fuel and tyres.

The strategy dropped Whincup from second to 11th, but put Lowndes in a position to fight for the victory.

“Jamie basically gave me the win by pulling over at the stop to let me through,” said Lowndes afterward, having moved to second in the standings, three points ahead of Mark Winterbottom.

“When I was coming down pitlane the boys told me that Jamie was going to pull over and let me passed.

“We talked about the scenario before the race but for that to activate we had to be close enough to Jamie. At the first round of pitstops I wasn’t but at the second round I was.”

Lowndes is aiming to finish second in the title for the fourth time in his career having earlier done so in 2005, 2006 and 2011.

The now 38-year-old has finished no worse than fourth in the standings each year since joining Triple Eight in 2005.

Today’s victory for Lowndes came despite the TeamVodafone Holden qualifying just 16th and falling to 23rd on the opening lap due to a collision with Garth Tander.

“The start wasn’t what I planned but that’s what happens unfortunately,” he said.

“We stuck to your game plan of a two-stop strategy – we did talk about a three-stop but where we were positioned we thought two would be better.

“At the end of the race we were all trying to save fuel while running as fast as we can.

“My car was really good, I was able to flow the car through the corners which meant that when I was chasing Tim (Slade) I could run quickly enough while saving fuel.”

A second 250km race around the streets of Sydney Olympic Park will bring a close to the 2012 championship tomorrow.