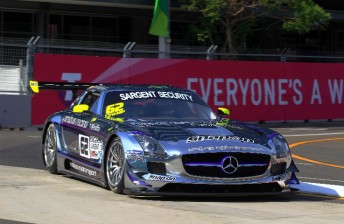 Bernd Schneider took a race win on debut in the AGTC

Bernd Schneider has handed down an absolute lesson in an opening Australian GT Championship race which has seen the championship lead change hands after Peter Hackett failed to finish.

Schneider had bolted clear of the field by the time that team-mate Hackett lost the rear of his car at the narrow Turn 5 sweeper on Lap 3. The SLS AMG GT3 slid rearwards into the outside wall, bounced to the inside and back to the outside, before finally coming to rest up against another wall after momentum carried it across the left-hand kerb at the bus stop.

Klark Quinn was the major beneficiary as he brought the VIP Petfoods Porsche GT3 home in second, just over 17 seconds behind the former DTM and sports car ace in a race which was mercifully shortened to just over 18 of the 30 scheduled minutes due to time restrictions. Quinn now leads the championship by eight points with a race remaining.

John Bowe set up Peter Edwards for a run to third in their Ferrari 458, while Tony Quinn was fourth in a strung-out, 11 lap affair.

Peter Conroy, Dean Koutsoumidis, Rod Salmon, and Scott Taylor were the other finishers, while Nick McBride also failed to see the chequered flag thanks to mechanical issues with his Porsche.

Schneider had secured pole from Bowe earlier in the morning by over 1.7s.