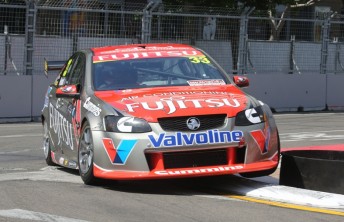 Alexandre Premat says he is looking forward to his second season with Garry Rogers Motorsport next season, despite the wily team owner not giving the Frenchman any guarantee that he will be at the team next year.

The Frenchman signed a multi-year agreement to drive for the Fujitsu-backed Holden team in the V8 Supercars Championship from this season, where he has been paired alongside five-year team driver Michael Caruso.

While Caruso has been lured to Kelly Racing’s rebranded Nissan Motorsport team for 2013 (currently 15th in the championship), Premat has endured a frustrating start to his V8 career, which culminated in Rogers benching the former DTM driver for the Armor All Gold Coast 600 event.

In the following two events, Premat was put back into the #33 Fujitsu Commodore where he produced a series of improved qualifying results and race performances.

Rogers has already confirmed that Nissan-bound Caruso will not be a driver at his team next year, and when contacted by Speedcafe.com yesterday, he would not be drawn on the make-up of his line-up next year.

Premat is adamant that he has a deal to drive for GRM next year, and is confident that he has learnt enough in his rookie season to make a serious impression in 2013.

“From my point, I’ve signed a contract of three years with Garry,” Premat told Speedcafe.com.

“I will be here next year, but in the contract, there are always some breaches, and you can stop the contract and all those things.

“There’s things that won’t help me because I’m almost last in the championship, but in the last two races, I showed that I was really quick in terms of speed and things.

“Definitely, I’m trying to do my best here to keep the seat because I really enjoy to be here.

“It has been a hard year because I had to learn everything – tracks, team, set-up, car, tyres, a lot of different things. For me, I had to start from zero. I have to learn so many things. I went step by step, and now I’m making small steps to catch Robbo (Michael Caruso).

“You can’t just come in the series from America or Europe and win races because the series is very high level and it’s been hard.”

While Premat says that he was disappointed to miss the Gold Coast race, it may have been a blessing in disguise. American Ricky Taylor rolled Premat’s car in the huge start line crash, and the wrecked car has not raced since.

Premat switched to one of the team’s spare Commodores, and he put some credit of his form reversal to driving the ‘old’ car.

“Since i came back with the spare car, it has been really good, a bit better than my race car,” he said.

“(but) I had to give some response to Garry, and this is what I gave in Abu Dhabi and Winton, in qualifying and races.”

Premat was given his first taste of the GRM’s Car of the Future Commodore during its first full test day at Phillip Island last week. With that experience in hand, he is confident he can produce stronger results next year.

“I need to do what Michael did this year, maybe a bit stronger because all the racing will be much closer with the new car.

“My expectation is to finish near the top to maintain my seat for the year after.

“We can do it, the team has really good resources, good cars, engineers and mechanics, so I think we can do a really good job. We’ve seen the pace of Michael this year has been quite good, so we can do the same next year, but more constant doing the whole rounds.”