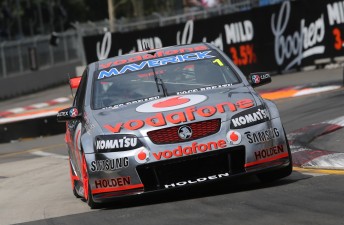 Jamie Whincup has completed practice day at the Sydney Telstra 500 by knocking Will Davison from the top of the times in the dying seconds of Practice 4.

Whincup, who had languished in just 14th before his last, single lap, run, bolted on a set of green tyres in order to take the top spot.

Ambient temperatures remained in the mid-30s during the final session, although a layer of cloud cover that had rolled in during the mid-afternoon dramatically lowered track temperatures, contributing to the faster times.

Negotiating the electronic kerb-hopping sensors in the Turn 2/3 and 6/7 chicanes continued to be a major challenge for the drivers, with fast times continually being erased for infringements.

Rick Kelly suffered the worst at the hands of the system in Practice 4, with the Jack Daniel’s Racing Holden driver having his first five times all taken away. The 2006 champion ended the session 19th.

The V8 Supercars will return to the Sydney Olympic Park Street Circuit for qualifying at 0925 local time tomorrow ahead of the Top 10 Shootout at 1200 and Race 29 of the championship at 1505.