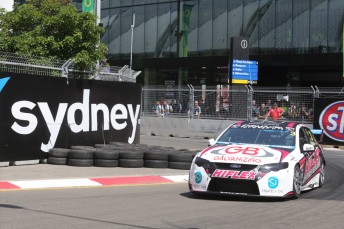 Tony D’Alberto has emerged fastest from the first of four V8 Supercars practice sessions on a scorching day at Sydney Olympic Park.

The Hiflex Falcon shared the top spot with the VIP Petfoods Ford of Steve Owen for much of the session.

D’Alberto eventually emerged quickest by 0.4s after clocking a 1:30.04s time on the first lap of his third and final run.

Temperatures at Sydney Oympic Park soared into the 30s during Practice 1, with some parts of Sydney expected to reach 40 degrees later today.

The 30 minutes session was interrupted by a single red flag period, called to retrieve Tim Blanchard’s Jack Daniel’s Racing Holden after its engine cut out at the exit of Turn 7.

It was also less than an ideal first hit-out for stable-mate Greg Murphy, who parked his car after just four laps complaining of a major imbalance.

The field spent much of the early running undertaking routine radio checks around the circuit, which is notorious for communication difficulties.

The kerb-hopping sensors in the Turn 2/3 and 6/7 chicanes were also given a workout as the majority of drivers had at least one of their times nullified for kerb offenses.

Moffat survived a late moment at the latter chicane, running his Norton DJR  Ford over the end of the Turn 7 apex tyre bundle before narrowly missing the exit wall. The car appeared undamaged but was pitted immediately as a precaution.

The V8 Supercars will return to the track at 1120 local time for a second bottom 50 percent practice session.