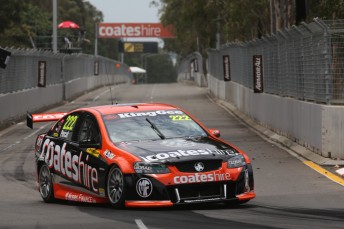 Nick Percat has continued his run of good form by setting the fastest time in Practice 1 for the final round of the Dunlop V8 Supercars Series at Sydney Olympic Park.

The Coates Hire-backed driver spent the bulk of the session at the top of the time sheets, while Scott McLaughlin made brief interludes at the top over the course of the 40 minute session, eventually finishing second.

Percat set the best time during his second run, a 1:30.2317s with 15 minutes remaining. During his third run, he managed the fastest split to the second sector but fell marginally short of lowering his own best time.

McLaughlin had briefly fallen to third with just under 10 minutes remaining until he set a 1:30.4675s on the Fujitsu Falcon’s penultimate lap of the session, narrowly edging out fellow series contender Chaz Mostert, whose best effort of 1:30.4750s came after the chequered flag fell.

The second Dunlop Series practice session will be held at 1440.