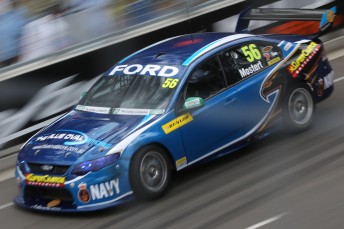 Chaz Mostert has set the fastest time in Practice 2 ahead of final round of the Dunlop Series at Sydney Olympic Park today.

The Ford Performance Racing driver exchanged fast times with title rival Scott McLaughlin in the first half hour of the 40 minute session, before pulling ahead of the Fujitsu Falcon. Fellow series contender and Practice 1 fast man Nick Percat was third.

Mostert set a 1:29.0623s for what would ultimately be the fastest lap of the day with a committed effort in the final minute. However, the 2010 Australian Formula Ford Champion did fall off the knife edge while attempting to lower his own mark again on the very next lap, sliding into the Turn 8 tyre wall. The car received only minor damage.

McLaughlin briefly dropped to third before jumping back above Percat late in the session, while the top 10 was completed by Scott Pye, Dale Wood, Ash Walsh, Andrew Jones, George Miedecke, Marcus Zukanovic and Rodney Jane.

Unlike the morning’s uninterrupted session, the red flags made two appearances, both involving tyres bundles. Luke Youlden buried his MW Motorsport Falcon in the rubber at the exit of the back chicane complex early on, while Zukanovic became snagged at the bus stop at the halfway mark.

The Dunlop V8 Supercars Series is back on track for qualifying tomorrow at 1000.