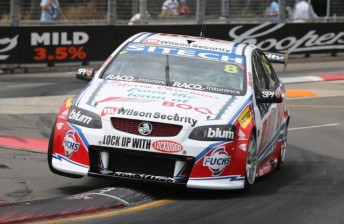 Jason Bright led the way in the third V8 Supercars practice session of the day at Sydney Olympic Park as the full field took to the circuit for the first time.

The Team BOC Holden continued its good form from the morning, moving to the top of the order with a 1:29.43s lap at the 13 minute mark of the 30 minute session.

The time would not be beaten for the duration, with Jamie Whincup coming closest on 1:29.48s moments prior to a late red flag to retrieve Jonathon Webb’s stranded Holden from the circuit.

Just 2:44s remained on the clock when the session resumed, leaving few drivers to improve in the late scramble.

One of the few to go faster was Will Davison, who jumped from fifth to third with his final flyer in the Tradingpost FPR Falcon.

Practice 1 and 2 pace-setter Tony D’Alberto ended up fourth despite spending two minutes of the session parked in his pit box as a penalty for knocking down the pit entry cones.

The electronic kerb-hopping sensors in the Turn 2/3 and 6/7 chicanes were again a big talking point, with drivers continuing to struggle with the system.

Fast-man Bright had four of his first five laps in the session discarded due to kerb infringements, leaving the former Bathurst winner convinced that the sensitivity of the detectors had been increased since Practice 2.

Another to struggle with the set-up was Holdsworth, who had a session-high five times disallowed on his way to 26th in the final result.

Others including 19th placed Craig Lowndes and 23rd placed Garth Tander tasted the wrath of the sensors four times each.

The day’s high temperatures continued for the third session with the ambient remaining in the mid-30s despite cloud cover rolling in overhead.

The fourth and final practice session of the day will get underway at 1530 local time.