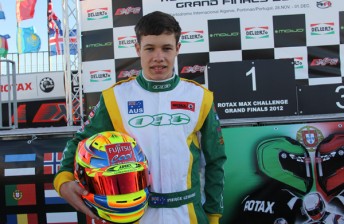 Reigning Australian Champion Pierce Lehane has led the way for the Australian team during qualifying at the 2012 Rotax Max Challenge Grand Finals in Portimao, Portgual on Wednesday.

Lehane set the pace in the Senior Max category to qualify on pole position qualifying five one-thousandths of a second ahead of British driver James Singleton.

“It feels great to be able to qualify on pole position with the world’s best drivers here.  It’s a great position to start of the front for all of my heat races, now we’ve just got to race it out,” said Lehane, who finished third in the Junior Max category in Italy during 2010.

“No-one is going to be able to get away, it’s just going to be about being at the front at the right time of the race because drafting will become a big thing during the races.”

Australia’s two other drivers in the Senior Max category, Joseph Mawson and Daniel Rochford endured challenging days and as a result set the 30th and 54th fastest time overall.

Victorian Hamish Leighton continued to show that he will be a podium contender this weekend by setting the fifth fastest time in the DD2 Masters category. Brent Coghlan was 27th while Jose Ruiz was 36th.

Kyle Ensbey finished as the best of the Australian drivers in the DD2 category with the 16th fastest time. Troy Woolston set the 50th fastest time overall. An incident in final practice for Jason Pringle and further issues in qualifying led to him being well down the order.

In the junior ranks it was Thomas Randle who faired the best of the Australians in 14th overall, while James Golding was 24th and Joseph Burton-Harris, who continues to overcome engine issues was 29th fastest.