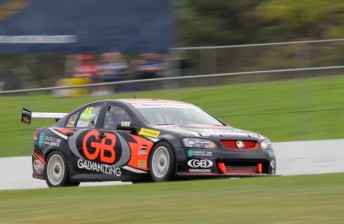 Pollicina will campaign the Tasman Motorsport-built Holden Commodore VE in which Steve Owen won the 2010 Dunlop Series having recently purchased the chassis from GMR.

The team is competing in its current guise for the final time ahead of a post-season takeover by Formula Ford team owner Josh Evans.

To be rebranded as Evans Motorsport, the squad will field two ex-Ford Performance Racing Ford Falcon FGs next year. Deals to run the ex-Triple Eight Holden Commodore VEs purchased by Geoff Emery and Tony Bates have also been mooted but are yet to be locked in.

“I bought the car because it has some good pedigree,” he said of TMS 002, which finished second in the 2008 Bathurst 1000 in the hands of Greg Murphy and the late Jason Richards.

“Part of the deal included the opportunity to race it this weekend, and I’m looking forward to it because the calibre of drivers in the Dunlop Series is very good, so racing against them will improve my driving, which will help me in the Kumho Series as well.

“At this stage, I’m planning to do the Kumho Series again in the VZ next year, and maybe some rounds of the Dunlop Series in the VE, budget permitting.”

GMR’s other two cars competing in the 20 car Dunlop Series field this weekend are being driven by season regulars Dale Wood, who scored a maiden win last time out at Winton, and Geoff Emery.

Fujitsu Racing’s Scott McLaughlin tops the standings heading into the final round with Nick Percat, Chaz Mostert and Scott Pye all within 82 points of the leader. A total of 300 points are available across the weekend’s two races.