Four-car Car of the Future display for Homebush

Four-car Car of the Future display for Homebush 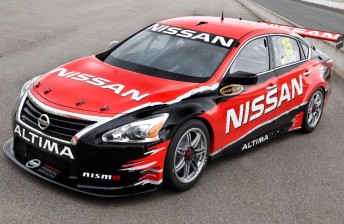 Ford, Holden, Nissan and Mercedes-Benz AMG will all be represented in a four-car Car of the Future display at the Sydney Telstra 500 this weekend.

Ford Performance Racing’s first FG Falcon race car will be joined by Triple Eight’s first VE-bodied Holden and Kelly Racing’s first Nissan, which will all take to the track for a hot lap session on Sunday.

The running will mark the first time that the next-generation cars from the three marques will share a race track, having only previously run together in V8 Supercars’ recent five-day aerodynamic test at the RAAF’s Gippsland, NSW, base.

The race cars will be on display for fans at the circuit in the pit pavilion, where they will be joined by an AMG road car representing the Mercedes-Benz entries to be fielded by the merged Erebus-SBR outfit next year.

The AMG offering is expected to be kept under a cover, with the 2013 E-Class bodywork that the V8 Supercar will be based on not set to be publicly released until the new year.

The hotlap session, meanwhile, will see Rick Kelly drive the Altima for the first time- a milestone that the 2006 champion says he’s greatly looking forward to.

“The interest in the Nissan Altima V8 Supercar has been overwhelming all year, especially now that we have unveiled the first car,” said Kelly.

“While I’m sure that the fans will be excited to see the Altima in the flesh for the first time, there’s no doubt that the most excited person to hear this news confirmed is actually me.

“I’ve been busting to get my first drive of the new Nissan all year long as we’ve been watching the car take shape in the various departments of our team workshop. So to get the chance to drive the Altima V8 Supercar in front of a crowd at the Sydney Olympic Park street circuit is going to be a fantastic buzz.”

First practice for the Sydney Telstra 500 will get underway tomorrow.