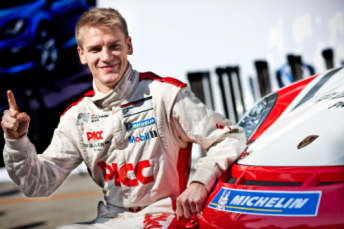 Porsche Carrera Cup Asia champion Alexandre Imperatori is a late entry into the Carrera Cup field at the Sydney Telstra 500 this weekend.

The 25-year-old Swiss driver will compete in the final round of Porsche City Index Carrera Cup Australia with backing from Tyreplus.

Imperatori will drive the Hunter Sports Group entry last seen in the hands of Ant Pedersen at Bathurst.

After dominating the Asian series this year, including seven wins from 11 races, Imperatori says that he is looking forward to the challenge of racing against Australia’s best around one of toughest street circuits.

“I’m very much looking forward to this weekend,” he said.

“It looks like a fantastic, challenging street circuit and I know Craig Baird and some of the drivers from different categories I’ve raced in the past, so I expect the competition to be very strong.

“It’s my first time here, I don’t know the track and it was a last-minute deal so I don’t really know what to expect, to be honest. I’ll just try to enjoy the weekend and we’ll see tomorrow whether we can be competitive from the get-go.”

Imperatori is one of two late entries in Carrera Cup this weekend, with Porsche rookie Michael Almond set to join the established drivers around the Sydney street track.