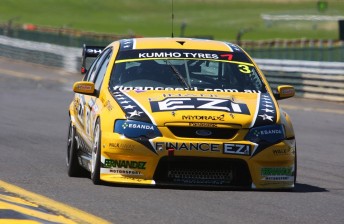 Recently crowned Kumho V8 Touring Car Series winner Josh Hunter is hopeful of graduating into the Dunlop Series next season, and could do so with Dick Johnson Racing’s recently announced Junior Development Program.

The 17-year-old Sydneysider, who is the grandson of speedway great Garry Rush, made the leap from state level Formula Ford competition to the third-tier V8 Supercar series this year.

Despite missing several races due to mechanical issues, Hunter took 10 of the 18 victories – including the last six in succession – and is now searching for funding to move into the more competitive Dunlop Series.

“That would be our ideal scenario (graduating to the Dunlop Series), but like anything sponsorship is what you need to get there,” Hunter told Speedcafe.com of his plans. 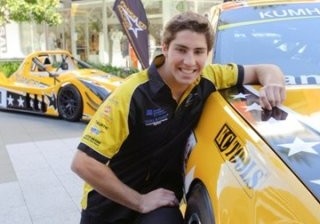 Josh Hunter, pictured at the announcement of his Finance Ezi backing earlier this year

“I’ve had good support this year, particularly with Finance Ezi, but we’re going to need some more funds next year if we’re going to do the Development Series.

“I’d really like to do it, it’s a competitive series and it’s where a lot of the endurance drivers get chosen from.

“I really enjoy driving these cars and eventually getting into the main championship is the dream.”

A DJR spokesman confirmed to Speedcafe.com that Hunter will be a part of a planned multi-driver test in January ahead of its recently announced two-car assault on the second-tier category next year.

Hunter picked up Finance Ezi backing halfway through the 2012 season, running the final rounds in an identical livery to that campaigned in the series by the loan company’s owner and now Dick Johnson Racing board member, Maurie Pickering.

Jane finished sixth in this year’s Kumho standings and is the son of four-time Australian Touring Car Champion and four-time winner of The Great Race, Bob Jane.