Kelly Racing co-owners Rick and Todd Kelly will end their long association with Holden by running a pair of tribute bonnets on the two Jack Daniel’s Holdens in Sydney this weekend.

Although Tim Blanchard continues to drive the #7 entry while Todd Kelly recovers from post-Bathurst shoulder surgery, the two bonnets feature a range of statistics from the careers of the two Kellys with Holden.

Todd and Rick Kelly have made all of their combined 707 V8 Supercars Championship race starts with Holden having both enjoyed extensive careers with the factory Walkinshaw Racing outfit prior to starting their own team in 2009.

“It’s very important for both Todd and I to remember where we have come from and that we have been able to achieve the things we have because of the great support of companies like Holden,” said Rick Kelly ahead of the weekend. 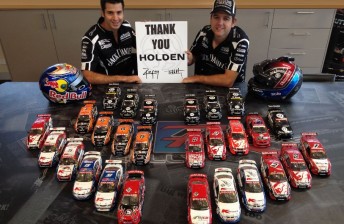 “The unique bonnet liveries that we will run this weekend are a great way for us to show this.

“The final laps of Sunday’s race won’t be taken lightly, and we hope to be able to finish this great and successful relationship on as higher note as possible.”

The Kellys have raced without Holden branding on their cars over the last three years after the manufacturer cut back its support of the young team to a parts-only deal following its rookie season.

See below for the statistics displayed on the respective bonnets