How close did Jenson Button come to racing in Sydney?

How close did Jenson Button come to racing in Sydney? 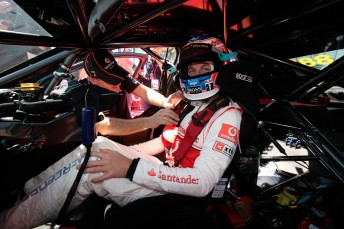 McLaren Formula 1’s star Jenson Button was close to becoming a wildcard in the Sydney Telstra 500, Speedcafe.com can reveal.

As part of Vodafone’s sponsorship activation, the telecommunications company and its V8 Supercars partner Triple Eight were involved in a series of approaches to Button for him to compete in the season-ending Homebush event.

Button drove a V8 Supercar on two occasions during Vodafone publicity events in 2010 and 2011. It was all he needed to get a feel for V8 Supercars and, at the time, was keen on the idea of racing a V8 in the future. 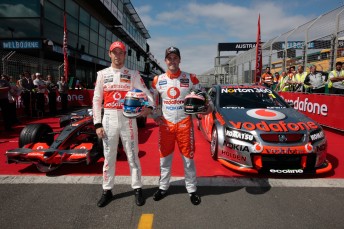 It is believed that Button was interested in competing as a wildcard in Sydney with TeamVodafone, but date clashes and other prior engagements rendered the plans stillborn.

After a six-year title sponsorship arrangement, Vodafone will withdraw its support of Triple Eight’s team.

During Vodafone’s stint with the team, Triple Eight and its drivers Whincup and Lowndes have been involved in some entertaining, exciting and bizarre publicity stunts, including lawn mower racing, riding giant rubber ducks and racing tanks.

While the ‘car swaps’ at Albert Park and Bathurst created much hype, Button racing in Sydney could have been the biggest of all, had it materialised.

“We had one or two highly speculative conversations about wildcards. Ultimately, it didn’t go anywhere,” Dane told Speedcafe.com when asked about plans for Button to compete in Sydney.

While Dane would not speak in detail of the conversations that were had with Button, he did say that Vodafone was keen on the ‘wildcard’ concept.

“We talked about the idea of running the odd big name, but it never materialised for whatever reason,” he said.

“The highlight of Vodafone’s activations was Craig and Jenson driving a Formula 1 car at Bathurst. Jenson had a lot of fun in both the F1 car and a V8 Supercar around a track like that.”

The champion team cars of Jamie Whincup and Craig Lowndes will carry special liveries this weekend in Sydney, celebrating Vodafone’s final event in the sport.

CLICK HERE for Speedcafe.com’s news story on the look of Whincup and Lowndes’ Commodores.

CLICK HERE for a photo gallery, looking at TeamVodafone’s six year stint in the sport.