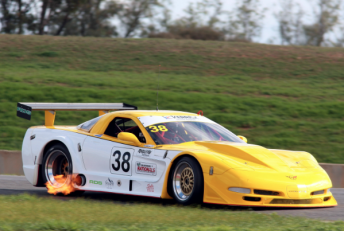 Des Wall has passed away, aged 61, after a short fight with cancer.

Wall, the winner of the 2009 Kerrick Australian Sports Sedan Championship and father of current V8 Supercars driver David, was diagnosed with cancer in July this year.

The Wall family made history in 2009, with both Des and David winning national titles (David won the Australian GT Championship). It is the first and only time a father and son have been national title winners in the same year.

While ill, the Sydney-based driver continued to compete in the Sports Sedan title in his Corvette this year. Despite missing the final two rounds of the championship, he finished fifth overall. He was leading the title at the time of his withdrawal. 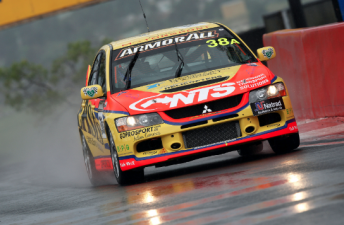 He crossed the line first in Class A during the 2010 Bathurst 12 Hour with son David and Trevor Symonds in a Mitsubishi Lancer Evo IX. The car was later excluded for a technical infringement.

Speedcafe.com passes on its condolences to the Wall family.

Messages of support for the Wall family flooded social media this morning. Below are a collection of words from prominent members of the Australian motorsport community.

Craig Baird: Very sad to hear the loss of Des Wall. Des was a true champion and will be missed by all of us. RIP my friend.

Andrew Jones: My thoughts are with all the Wall family. Very sad news, may Des rest in peace.

Fabian Coulthard: Our thoughts are with all the Wall family, sad sad news and such a loss to hear about the passing of Des Wall. RIP.

Tony D’Alberto: Condolences go out to the Wall family. RIP Des, it was a pleasure getting to know you during the past 2 years. You were a complete gentlemen.

Aaron Noonan, V8 Supercars commentator: Sad to hear the news of the passing of Des Wall.Thoughts with David and the whole Wall family.

Nick Percat: Sad news to hear about the passing of Des Wall. Thoughts are with the Wall family.

Marcus Marshall: My thoughts and prayers go out to the Wall Family. You would never meet a nicer family. Des will be sadly missed

Jason Bright: Gutted to hear of the passing of my teammates father Des Wall. Another great guy taken way too early. Why is it always the good guys?

Chris Lamben (V8 Supercars commissioner): Des was the personification of a ‘top bloke’ – one of the nicest guys I ever met in racing. Certainly one who didn’t deserve to get caught by this indiscriminate disease. Such a shame. Thoughts are with Vicki and the family.

Steve Johnson: Sad news 2day of the passing of Des Wall. Great bloke and will be missed. Thoughts and condolences to Dave and the Wall family.