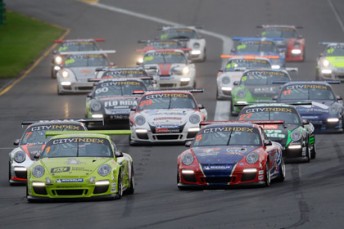 The category was put on hold at the end of the 2008 season before returning in 2011, with Sunday’s opening Sydney race on Saturday marking the 200th race start.

With Craig Baird holding an unassailable lead in the Carrera Cup standings, Davison will battle for second in the championship as Kiwi driver Jonny Reid is placed only seven points adrift.

“We haven’t had the success that we had hoped for at the last two rounds; we had motor problems at Bathurst and a Race 1 incident at Gold Coast, so we’re really motivated to get some race wins in Sydney to finish the year,” said Davison.

“I’ve spent a long part of my career racing Porsches all over the world. Porsche got me started in my professional career in Germany, and since I’ve raced Porsches in most of the endurance and sports car championships around the world, it holds a special place in my heart.”

Elite Class points leader Twigg is another driver set to reach the milestone of 100 starts, entering the final round with a healthy 143 point lead over nearest class rival James Koundouris (after dropping the least point-scoring round of each Elite Class driver).

“I’m proud to reach 100 race starts. I started Carrera Cup thinking that I’d do a few races, but to do 100 races is something that I never anticipated doing,” said Twigg.

“Now for this weekend, I’ve just got to be careful in practice and qualifying so that I don’t do any damage to my car. If I do that and get through Race 1, I’m sure we can secure the Elite Class championship.”

A former regular of the Porsche championship, Theo Koundouris, brother of Elite Class front-runner James, will return to Carrera Cup having last raced in the one-make category 12 months ago, also at Sydney Olympic Park.

Also returning to the category is Queenslander Shae Davies, who successfully debuted in Carrera Cup Australia at the last round on the Gold Coast.

Practice for the all-Porsche championship kicks off on Friday.