Triple Eight has competed as TeamVodafone since 2007 and has enjoyed 135 podium finishes, 84 of those race wins. The team also boasts 48 pole positions and a win ratio of 46.15 percent. That success includes four Bathurst 1000 wins and four driver’s championships. 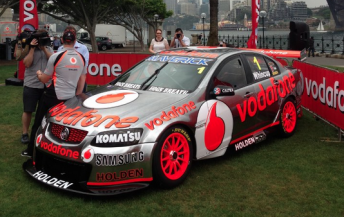 “This is a fitting livery to close out the TeamVodafone era,” said Whincup, who wrapped up the 2012 V8 Supercars crown at Winton recently.

“We’ve had huge success working with Vodafone and I personally really want to say thank you by delivering a win in the final race.”

Lowndes says he would love to close out the season with a win.

“I love the livery, it is very much like the McLaren Formula 1 car,” Lowndes said.

“It will be our last event as TeamVodafone so it is going to be a sad weekend but hopefully we can finish the 2012 season on a high.”

While Whincup has wrapped up the title, Lowndes remains a chance to snatch second in the series. He currently is in third place, just 63 points shy of Ford Performance Racing’s Mark Winterbottom.

The final event of the 2012 V8 Supercars Championship Series will get underway on Friday with four practice sessions. Saturday’s on track action will include qualifying, the top 10 shootout and Race 29.

The Sydney Telstra 500 will conclude on Sunday with a final qualifying session and Race 30 in the afternoon.

Here’s the video from today’s unveiling