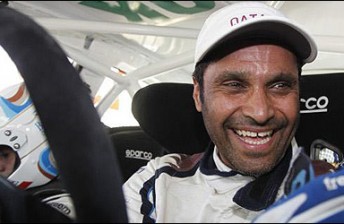 Ford may have withdrawn its official support of a full factory entry in the Wold Rally Championship, but the country of Qatar has stepped up with support for three M-Sport Fiesta WRC entries in 2013.

The Qatar M-Sport World Rally Team has been brokered by Middle East Rally legend and Dakar winner Nasser Al-Attiyah who will contest a seven-round programme scheduled around his other motor sport commitments that will include him chasing his ninth Middle East Rally title.

“We are looking forward to building on our strong relationship with M-Sport and working with them in 2013,” said Al-Attiyah.

“I am really looking forward to getting behind the wheel of the [Ford] Fiesta RS WRC and contesting as many WRC events as I can around my other motorsport commitments.”

It has been a busy time for Al-Attiyah who last week confirmed his Dakar programme in a two-car effort with Carlos Sainz; CLICK HERE for that story.

Confirmed for a full 13-event schedule is Mads Østberg who scored a top-five finish on each of the 11 rounds he contested in 2012, including victory in Portugal. The Norwegian secured fourth place overall in the drivers’ championship – just 5 points adrift of Ford World Rally Team’s Jari-Matti Latvala in third

“The partnership with Nasser and the Qatari State will enable M-Sport to continue at the pinnacle of the sport and we are looking forward to working together in the future,” said M-Sport Director Malcolm Wilson.

“Since the 2012 season came to a close, work has not stopped and the entire team is working around the clock to ensure we deliver a strong package for next year.

“Mads’ performance this year has been very impressive. He has always had the speed, but his progression on Tarmac and the maturity he has demonstrated this season proves that he is ready to make the next step in his career and made him the ideal candidate to join the team in 2013.”

“We’ve been working with the car [Ford Fiesta RS WRC] for two years now – we know the car and we know the team so from the technical side of things, I think we will be in a really good position as there won’t be too much of a change to get used to,” said Østberg.

“This is a great opportunity for me. I have had many dreams in my career, but achieving this drive is definitely one of the biggest and I am certainly going to try and make the most of it.”

The driver of the other fulltime entry has not been confirmed, the likes of Petter Solberg and Australia’s Chris Atkinson amongst the mix for the seat.