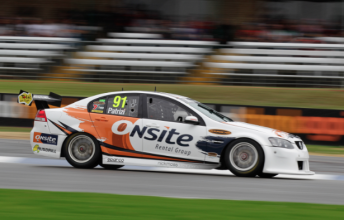 Michael Patrizi will compete at Sydney with backing from Onsite

It will be the second time that the West Australian company has been the major supporter of Patrizi’s #91 entry, after backing the car at the Perth and Phillip Island events in May.

Patrizi’s car will appear in a similar but different livery to that seen in Perth, pictured. The car will also have extra backing from Terex, Genii and long-time backer Ausdrill.

Patrizi enjoyed one of his best weekends in Perth with Onsite on the side of his car, finishing fifth in the final race of the event.

He hopes that he can reproduce that form on the Sydney streets.

“It’s great to see Onsite Rental Group back in V8 Supercars with my car,” said Patrizi.

“I actually had my best results with Onsite on the car at Perth and Phillip Island, so that gives me a little bit of extra confidence.

“Onsite is new to the sport and I’m proud to bring them into the game, and hopefully with some strong results in Sydney will see them continue on in Australian motorsport.”

Patrizi currently sits 19th in the V8 Supercars Championship and does not have a seat confirmed for the 2013 title.

After an improved, consistent season, Patrizi is confident that he has done enough to remain in the championship next year.

“I feel I’ve had a good year. We have scored some really good results and shown a lot of speed,” he said.

“Sydney is an important round for me in terms of my future. I don’t have a deal yet, but there are still a few options out there so we’ll see how it plays out.”

The Sydney Telstra 500 kicks off this Friday.