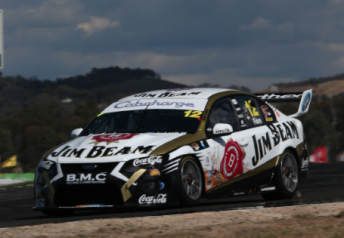 Dean Fiore is fighting to remain the primary driver of the #12 Dick Johnson Racing Ford Falcon in 2013.

The West Australian is searching for cash to complete his racing budget to continue in the game. If a sufficient level of funding can not be found, Fiore will consider offering the ride to other drivers.

There are a number of drivers who could assist in the running costs of the team’s entry, including current DJR driver Steve Owen, who enjoys a moderate level of personal sponsorship.

Owen, a two-time Development Series champion, is highly-rated by the DJR squad but will lose his current ride with the team when Paul Morris sells his #49 Racing Entitlements Contract to Lucas Dumbrell Motorsport.

Others in the current field with sponsorship that do not have confirmed rides are fellow West Aussies Michael Patrizi and Karl Reindler.

While he is considering vacating his role in the car, Fiore says that the priority is to be the driver of his car.

“I’m still trying to find a way to keep myself in the car,” Fiore confirmed to Speedcafe.com.

“I think I have enough back up options there (finding another driver), in case that doesn’t come off, but I’m 110 percent trying to keep myself in the game.

“It’s hard. If it wasn’t a transition year (with the introduction of the Car of the Future regulations), I’d think more about sitting out, instead of staying in the seat.

“If the category is ever going to have that level playing field, where it doesn’t really matter how much funding or how much support you have got behind you, next year will be it.”

DJR and Jim Beam announced its six year two-car sponsorship deal would draw to a close at the end of this season, leaving the Queensland team with the task of finding dollars for Steve Johnson’s #17 car.

While DJR’s primary focus is to fund its own #17 entry, the team has not ruled out assisting in funding Fiore’s car.