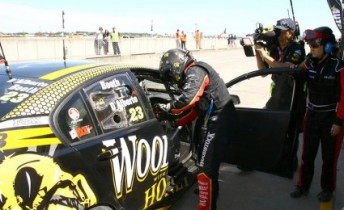 Andy Booth is loathe to point a critical finger at V8 SuperTourers amid the engine crisis that almost cost him and co-driver Tony D’Alberto racing at the series finale at Ruapuna.

The Woodstock Holden pair lost valuable track time in both practice sessions as their powerplant developed what could have been a terminal problem.

NZV8 convert Booth concedes the control 7-litre GM-built Mosler engine has not lived up to the specification for which it was intended.

It (the series) has been supplied a product that hasn’t quite met the spec that it was intended,” Booth told Speedcafe.co.nz

“To be honest I wouldn’t point a negative finger at the series.