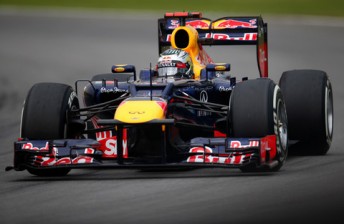 Sebastian Vettel has done it the hard way to win his third-straight Formula 1 title after finishing sixth at the season-ending Brazilian Grand Prix in São Paulo.

In what was a dramatic Grand Prix, Jenson Button won the race ahead of the Ferraris of Fernando Alonso and Felipe Massa.

Vettel was able to bring his Red Bull home despite a first lap incident that saw him drop to last on the road. Starting from fourth, Vettel got a poor getaway, then moved down on Bruno Senna and spun in front of the back-half of the field.

Despite damage to the side of his Red Bull, Vettel was straight away back on the pace and cut through the field.

The fickle weather, which the Interlagos Circuit is famous for, then played its part as light drizzle in the opening segment of the race brought majority of the field to the pits to change onto intermediate tyres. As others pitted, Jenson Button and Nico Hulkenberg remained on track and despite the greasy conditions built a lead of 45 seconds.

A Safety Car for debris on lap #23 negated this advantage as everyone soon changed back to slicks in the improving conditions.

Then 23 laps from the end, the rain returned and firstly Hulkenberg lost the lead to Lewis Hamilton, before the pair collided while lapping back markers. Hamilton was forced out of his final race with McLaren, while Hulkenberg rejoined the race.

While chaos seemed to be around him, Button kept his cool to take the chequered flag behind the safety car after Paul di Resta crashed at the final corner two laps from the finish.

Mark Webber had an up and down race to finish in fourth position. This all despite some anxious moments that included a half-spin and falling down the order after running wide after the re-start.

Daniel Ricciardo ran as high as seventh, but finished down in 13th as the rain set in at the finish.