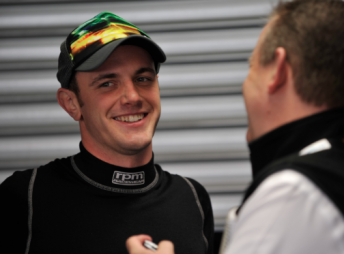 Tim Blanchard has retained his ride in the #7 Jack Daniel’s Racing Commodore for the final event of the V8 Supercars Championship in Sydney.

The team announced at Bathurst that regular driver Todd Kelly would miss the rest of the season due to a shoulder injury and subsequent surgery.

Blanchard, 25, drove with the team at the Sandown and Bathurst endurance races before being named as Kelly’s sub for Surfers Paradise, Abu Dhabi and Winton.

Team owner/driver Rick Kelly said that the team had considered offering the seat to a high-profile international driver for Sydney, but has decided to keep Blanchard for the team’s final event in Holden Commodores before switching to Nissans next year. 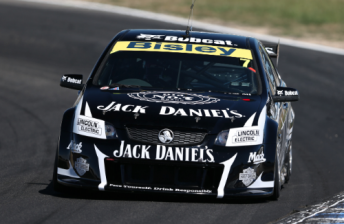 Tim Blanchard in the #7 Jack Daniel’s Commodore at Winton

“We always were considering our options, but keeping Tim was the most consistent option for us,” Kelly told Speedcafe.com.

“Homebush is almost the most difficult track that we go to, so it was decided that having someone in the car who knows the team, knows the cars and knows the track was the best option.

“We’ve been happy with Tim’s progress. Our team has had trouble getting speed out of my car, but he is doing a good job. He was only a tenth off me in Sunday qualifying at Winton, so that shows he’s coming to grips with it.”

Blanchard’s drive over the past three events have been his first ‘solo’ V8 appearances. The 2007 Australian Formula Ford champion has spent the past three years in the Development Series and has been linked to a Main Series seat with the two-car Lucas Dumbrell Motorsport team for next year.

Blanchard says that getting the laps under his belt in Sydney is crucial for his experience in the category.

“I’m excited to finish the year off with Kelly Racing,” Blanchard told Speedcafe.com.

“Each race we’ve been improving, and I’m looking forward to building on that for Sydney.

“It’s one of the toughest street tracks that we go to, and it looks like it’s going to be hot with a chance of rain. Conditions will be tough so it will be an interesting weekend.

“I want to be in the category full time next year. I don’t have anything locked away yet, so a strong result in Sydney will be a great way to end the year.”

The Sydney Telstra 500 at Homebush kicks off this Friday.