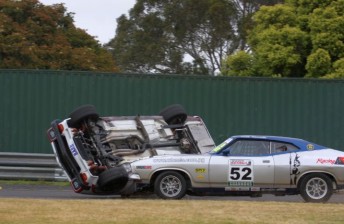 An opening lap rollover for Holden Torana driver Tony Edwards has made for a memorable start to the final day of the 2012 Touring Car Masters season at Sandown.

The local driver, who had started from eighth on the grid, escaped unharmed after contact from the Ford Falcon XB of Keith Kassulke at Turn 3.

The incident came amid a wild opening series of corners that saw the second and third placed cars of Andrew Miedecke and Brad Tilley make contact at the exit of Turn 1, spinning Miedecke across the outfield.

The race was restarted after a short delay, with the horsepower of Jim Richards’ AMC Javelin proving enough to hold off John Bowe’s Ford Mustang to take the victory.

“It was the usual ‘helter skelter’ of the first lap,” Edwards told Speedcafe.com after a trip to the medical centre.

“There were a couple of cars banging panels ahead of us and the next thing I knew Keith came across the grass and nailed me – absolutely poleaxed us. 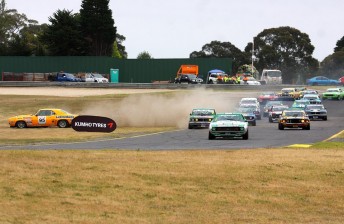 Andrew Miedecke speared off on the first start but was able to retake his front-row position after the red flag. PIC: Mark Walker

“I’ve been in rollovers before but not on the race track, just misspent youth,” he added with a laugh.

“I’ve hit walls at Calder Park Thunderdome (racing HQ Holdens) way harder than that, the accident wasn’t too bad, but getting out was a pain in the butt.

“You’re in such a cocoon in a car like this that when you try to get out you tangled up in everything. I was getting choked by my helmet, that was the worst thing.”

Edwards’ team is currently working to repair the car in time for the second race later this afternoon, allowing the Victorian to continue his battle with Andrew Miedecke – who failed to finish Race 1 with engine problems – for third in the points standings.

Remarkably, the morning’s action at the Sandown Shannons Nationals event later saw a second rollover, this time in the Australian Swift Racing Series.

The car of Damian Ward was sent into a barrel roll after the Queenslander used too much inside kerb while trying to overtake race leader Allan Jarvis at the final corner. Like Edwards, Ward escaped injury.

See below for video of the Edwards incident