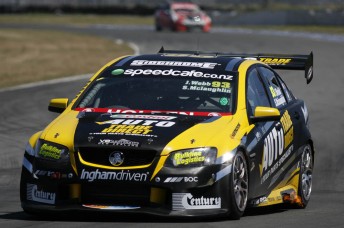 Scott McLaughlin played the part of a villian and a victor in a dramatic end to the inaugural V8 SuperTourer season at Ruapuna.

In the final race McLaughlin was hunting leader Greg Murphy before striking the #51 car in the rear and turning the touring car legend around on the last corner of the second last lap.

McLaughlin was given a drive-through penalty for the incident but he elected to remain on the racetrack for the final lap and took the checkered flag.

The 19-year-old McLaughlin was given a post-race time penalty with the win going to Steve Horne’s Tasman Motorsports Group team of Daniel Gaunt and Andrew Waite in an epic way to achieve the Kiwi team owner’s first victory since his IndyCar days back in the 1990’s.

In a bizarre outcome to the Championship the pitlane remained hushed for several minutes as the cars returned to parc ferme, seemingly bewieldered at the less than conventional end to the new star class of New Zealand motorsport.

Murphy produced one of his best rear-guard performances and was seemingly on his way to redemption after being punted out of the opening race.

To the cheer of a vocal Christchurch crowd Murphy moved into the lead after a restart on lap 41, slipping underneath Edgell who was fighting worn rubber.

With the time penalty served McLaughlin was punted from the provisional win to finishing 15th of the 17 starters. Murphy eventually pointed the car back the right way and crossed the line in fifth.

It almost cost McLaughlin’s outfit victory in the Teams Championship with the #93 finishing on top with 1809 points ahead of the #51 on 1752.

McLaughlin, who claims Murphy as his childhood hero, copped blame for the incident on the chin and walked down to apologise to the Kiwi ace after his press engagements.

“I was trying to get a run on the straight and unfortunately I spun out Murph who is a Kiwi hero,” a solemn McLaughlin said.

“I would do it differently if I had my time again. I just bumped him at the wrong time and it was a bit of inexperience. It’s the biggest mistake I’ve made all year but I will learn from it.

“I’m just a young kid trying to take his spot. It’s my fault we ended up losing the Teams Championship but we get No 1 on the car next year.”

Murphy accepted McLaughlin’s apology but said it didn’t lessen the fact that it was an unnecessarily stupid move.

“It’s just stupid. There’s no need to be touching the back of my car. He made a very bad judgement call,” Murphy told Speedcafe.co.nz

“He wasn’t trying to turn me around and I’ve got no issue with that. It was foolish because he’s ruined the perfect weekend for them.”

For much of the race it appeared that Edgell and co-driver Chris van der Drift would deliver the upset of the season after the latter’s dynamic drive off the pole position. Then Murphy made his move.

Webb was handed the starting duties for the second heat and did a solid job after starting from fifth position he gradually chipped away, first taking Simon McLennan in the M2 Motorsport Commodore for fourth and on lap 23, slipping underneath Jack Perkins in the #51 Mike Pero Commodore for third.

Two laps later Perkins was called in for his driver change with Murphy taking over while Webb followed a lap later with McLaughlin back in the hot seat. The Murphy/Perkins change was a full two seconds quicker than the Webb/McLaughlin swap and service.

McLaughlin was on the receiving end of a drive-through penalty for contact with Murphy on lap 28 and served his infringement two laps later in a race the teenager would rather forget.

But he is the champion and has beaten some very quick and experienced drivers over the course of a whole season.