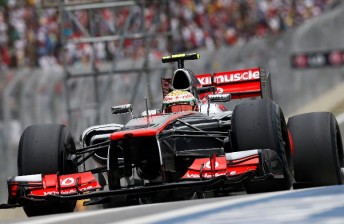 Lewis Hamilton scored his second pole in a week

McLaren duo Lewis Hamilton and Jenson Button have locked out the front-row of the grid for the season ending Brazilian Grand Prix at Interlagos.

The two Britons were separated by just 0.06s at the end of their second Q3 runs after knocking Australian Mark Webber from the top spot.

Webber will line-up third on the grid, one place ahead of team-mate and world championship leader Sebastian Vettel, who jumped from 10th to fourth in the dying stages of the session after a mistake on his first run.

Felipe Massa, Pastor Maldonado, Nico Hulkenberg, Fernando Alonso, Kimi Raikkonen and Nico Rosberg completed the Q3 order, although Maldonado will start just 16th after being handed a 10 place grid penalty for failing to stop at the weighbridge when requested in Q2.

Rosberg’s team-mate Michael Schumacher will start his final Grand Prix from 14th on the grid after another difficult session for the seven-time world champion.

Romain Grosjean had an even tougher time of it – knocked out of the session in Q1 after a touch with Pedro de la Rosa’s HRT left the Lotus with a damaged front-wing.

Following a damp start that required intermediates in the early stages of Q1, the majority of qualifying was held in dry conditions. Sunday morning rain at Interlagos is being predicted, potentially making for a mixed race.